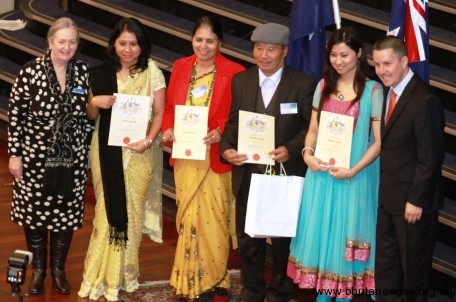 A total of 185 Bhutanese, who were resettled in South Australia since 2008, have received Australian citizenship at a special ceremony held in Adelaide on 16 June.

Under third country resettlement process, Bhutanese started coming to Australian in May 2008 after spending 20 years in refugee camps in Nepal.

Minister for Mental Health and Ageing, Mark Butler, granted citizenship certificates to them. Bhanu Adhikari, whose family was the first to arrive in Adelaide in May 2008, was one of those receiving the Australian citizenship on the occasion.

Bhutanese community also presented a traditional dance and other Nepali cultural items on display for the visitors.

Jointly organised by Department of Immigration and Citizenship (DIAC) and Bhutanese Youth Group (BGY), the event was part of the celebration of refugee week in South Australia. According to DIAC, this was the first event held in South Australia.

Brendan O’Connor, Immigration Minister, in his message sympathised for all the hard life Bhutanese endured during 20 years of refugee life in Nepal. He also expressed satisfaction that as citizen of Australia Bhutanese will have bright future.

BYG representatives Neeru Khapangi and Bibas Ghimire, speaking behalf of the Bhutanese community, expressed gratitude to the Australian government for helping them come out of the identity of refugees and all other support provided in the last five years.